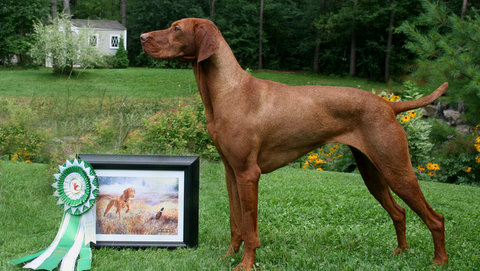 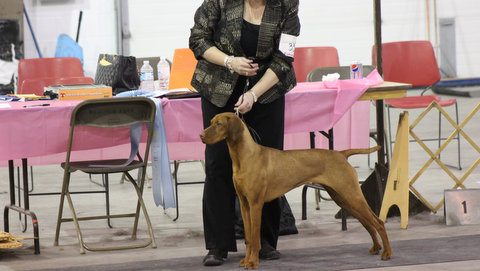 Achievements: Ruby is a dream come true after years of planning with Nancy Heinold of Paradox Vizsla. We started using Pat Hasting’s puppy puzzle in 2002 to evaluate our puppies and Ruby is one of the many positive results of applying our learning. Ruby’s structural balance and zest for life make her a good example of the breed.

Ruby’s father, Brok, has been turning heads and siring champions in the US and Canada so he was a natural choice for Scarlet’s second litter. As a puppy, Ruby won a Puppy Group, and a Group placement in one weekend. She was owner handled to her championship. She won BOS at the Vizsla Canada Specialty in 2011 under Judge Jean Fournier competing against over 60 dogs. In 2012 Ruby went to the VCA Nationals made the cut in the open bitch class. She has been shown selectively as we are training in obedience and the field. She completed her Field dog junior in the spring of 2013. In June of 2013 Ruby won Select bitch at the All Pointing Breed Specialty for her first points towards her Grand Championship. She will be back in the show ring in 2014 to work towards finishing that title and compete in obedience. Ruby is full of life and keeps us on our toes with her joyful energetic temperament.